Given the almost hysterical ( and often deeply amusing) fuss over the meaning of the "End of the Mayan Long Count calendar , the following information should, I think be promulgated more fully. (it's now only noted at a fairly obscure Wikipedia site):

December 18, 2012: Transit of Mercury as (hypothetically) seen from Venus

Since the Mayans were reputed to be experts in the motion of Venus, I find it rather interesting that these events are occuring at the 2012 solstice.....


As far as Science magazine is concerned, the 125 questions they listed are the biggest puzzles yet to solved by science. Some of them are directly related to my theories, and I believe they all have a common factor - something big from outer space that hits Earth every 5000 years or so...

Where do ultrahigh-energy cosmic rays come from? Above a certain energy, cosmic rays don't travel very far before being destroyed. So why are cosmic-ray hunters spotting such rays with no obvious source within our galaxy?

What powers quasars? The mightiest energy fountains in the universe probably get their power from matter plunging into whirling supermassive black holes. But the details of what drives their jets remain anybody's guess

What drives the solar magnetic cycle? Scientists believe differing rates of rotation from place to place on the sun underlie its 22-year sunspot cycle. They just can't make it work in their simulations. Either a detail is askew, or it's back to the drawing board.

What causes ice ages? Something about the way the planet tilts, wobbles, and careens around the sun presumably brings on ice ages every 100,000 years or so, but reams of climate records haven't explained exactly how.

How can genome changes other than mutations be inherited? Researchers are finding ever more examples of this process, called epigenetics, but they can't explain what causes and preserves the changes.

What caused mass extinctions? A huge impact did in the dinosaurs, but the search for other catastrophic triggers of extinction has had no luck so far. If more subtle or stealthy culprits are to blame, they will take considerably longer to find.

How many kinds of humans coexisted in the recent past, and how did they relate? The new dwarf human species fossil from Indonesia suggests that at least four kinds of humans thrived in the past 100,000 years. Better dates and additional material will help confirm or revise this picture.


A whale with a mysterious singing voice that matches no other has been spotted cruising the ocean alone every autumn and winter since 1992, singing at a frequency of 52 hertz. Other whales sing at between 15 and 20 hertz. The routes taken by the mammal also do not match migration patterns of other species. But US marine biologist Mary Anne Daher said the calls were clearly that of a baleen, the family that includes blue and humpback whales. She doubts the whale belongs to a new species, although no similar call has been anywhere else, New Scientist reported.

The "heads in jar" technology fetured in Futurama may not be all that far into the future after all. The heads of mokey's have already been transplanted to the bodies of other (less fortunate) monkey's and researchs beleive that the human brain is also capable of sustaining such transplant as well.

Wouldnt it be awsome if some day you could go to the "head mussem" and have a chat with former presidents or the briliant minds from the past? haha.. Thats halfbakery , please forgive me, what happened to halfbakery.com?? That site was revolutionary.

So, all in all, what we're seeing is a lot more than just what they call Earth Changes. Some people get into the idea that there is an interaction Between the Earth and the Sun that's going on here. Very, very few people are aware of the work that is being done in the Russian National Academy of Sciences in Siberia, specifically in Novosibirsk, where they are doing this research.

They've come to the conclusion that the only possible thing that could be causing this energetic change all throughout the Solar System is that we are moving into an area of energy that is different - that is higher.

Now, check this out. The Sun itself has a magnetic field, of course, and that magnetic field creates an egg around the Solar System, which is known as the heliosphere. The heliosphere is shaped like a teardrop, with the long and thin end of the drop pointing in the opposite direction from the direction that we're traveling. It's just like a comet, where the tail is always pointing away from the Sun.

I was reading about the Photon Belt courtesy of Clow in 1997 - but its the sort of thing that, well over time knowledge spreads. (no tinfoil beanie necessary...YET.)


This is doing the rounds in emails:

When NASA first started sending up astronauts, they quickly discovered that ball-point pens would not work in zero gravity. To combat this problem, NASA scientists spent a decade and $12 billion developing a pen that writes in zero gravity, upside down, on almost any surface including glass and at temperatures ranging from below freezing to over 300 C.

The Russians used a pencil.


"Eham.net, the website for Ham Radio enthusiasts, is reporting that the controversial HAARP research facility in Alaska is set to quadruple in power over the next 3 years. Technical Specialist Richard Lampe said that 'joint funding through DARPA will allow HAARP to quadruple in size from its current 960 kW output to 3.6 MW.'"

There are some who believe it could be a weapon, others think it could accidentally cause a poleshift. Do a Google search on HAARP to learn more.

As we move forward into the techno society of the future, it is important to realize that the rights of the individual are paramount. We should not be swept away into the mind dulling sheepish attitude that crowd psychology promotes, and allow ourselves to be entranced by the thought contagion of little minds and dogmatic institutions.

This thought contagion can be shown in the silence that spreads across a crowded room instantaneously and is the result of the morphic resonance of the group mind. Dr. Rupert Sheldrake delineates the theory of morphogenetic resonance as, “a nonmaterial organizing collective memory field that affects all biological systems. This field can be envisioned as a hyper spatial information reservoir that brims and spills over into a much larger region of influence when critical mass is reached - a point referred to as morphic resonance.” 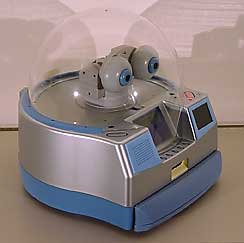 While you are away, let the Fujitsu MARON-1 robot patrol your house. Keep in touch with it using your mobile phone. If it detects an intruder, it can yell or phone for help. And much more.

Won't be long before they are capable of minding the kids!

While you are away, let the Fujitsu MARON-1 robot patrol your house. Keep in touch with it using your mobile phone. If it detects an intruder, it can yell or phone for help. And much more.

Won't be long before they are capable of minding the kids! 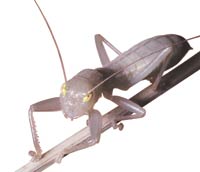 "Gladiators are carnivorous, and they eat a variety of other insects, some as large as themselves. In the wild we saw them feeding on small moths, silverfish and cockroaches. In captivity they seemed to prefer living flies and crickets. Dead mealworms also suit their tastes."

Not just a new species, the Gladiator represents an entire new order of insect.


NASA are considering the idea of transmitting power from satellites to Earth via microwaves.

"One of our main questions is how organisms will respond to sustained microwave exposure because the beam from space will be on all the time," said scientist Jay Skiles of NASA Ames Research Center in California's Silicon Valley.

This may be all well and true, but could there be a further reason for this experiment, something to do with fears of space radiation increasing... (probably not, I'm no conspiracy freak!)
link me    RobertBast, May 21, 2002 at 4:43:00 PM AEST


Gamma Ray Bursts are from Supernovae


Long been guessed at, finally proven (well as much as space scientists prove anything)

Rats controlled by implants in their brains could one day be used to search for landmines or the buried victims of earthquakes. Researchers have created 5 of these ratbots and succeeded in steering them through an obstacle course by remote control.


"Companies could soon be modifying everything from the farm animals that produce our food to our pets....The extra DNA is simply injected into an animal's bloodstream. Within a couple of weeks, it is integrated into a high proportion of cells in many different tissues"....reports New Scientist

This news has been very under-reported by the mainstream media, but the implications are extraordinary - it appears that:

Meat will one day be grown in factories

In a bid to make a simple source of nutritious food for long-distance space travellers, scientists at Touro College in New York have managed to make slices of fish grow bigger. Their achievement holds out the prospect of growing meat in industrial quantities from the muscle cell lines of various animals or fish.

"This could save you having to slaughter animals for food," says project leader Morris Benjaminson....Benjaminson's group cut chunks of muscle five to 10 centimetres long from large goldfish. After washing the chunks in alcohol, they immersed them in a vat of fetal bovine serum, a nutrient-rich liquid extracted from the blood of unborn calves, which biologists usually use for growing cells in the lab.


"Pulses of light have been slowed down and stopped in a solid for the first time. Alexey Turukhin of the Massachusetts Institute of Technology in the US and colleagues used an yttrium-based crystal to slow light pulses to just 45 metres per second, and then to trap and release them. Previously, these effects had only been seen in gases, which are more difficult to control. A solid should be easier to develop into real applications, such as high-density information storage for quantum computing" - More at PhysicsWeb

Note: One month later they did the same thing at Rowland Institute in Cambridge, Massachusetts.

PLUS! Electricity goes faster than the speed of light...(well, they cheat)