Man makes robot clone of himself 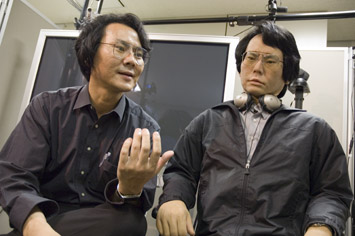 It blinks and fidgets in its seat, moving its foot up and down restlessly, its shoulders rising gently as though it were breathing. These micromovements are so convincing that it's hard to believe this is a machine -- it seems more like a man wearing a rubber mask. But a living, breathing man. [and it talks...]


Police & military robots will patrol Korean streets within the next 5 years.

"Patrol bots will guard the streets at night, and even chase criminals, while horse-shaped combat bots will augment the country's fighting force. In both cases, the bots will communicate via Korea's vast mobile network."

Amazingly, RoboCop, and all the problems highlighted in the movies, could be reality real soon!


The prototype, unveiled in Tokyo, can guide guests to a meeting room, serve coffee on a tray and push a cart with a load of up to 10 kilograms, says Honda. 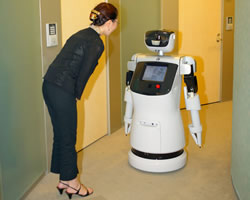 Goes on sale in limlited quantities this November in Japan

A shape-shifting robot comprised of many independently moving components has been demonstrated walking, rolling and slithering for the first time.


Rise of the Machines!


For a while it was looking like a future with sci-fi robots was never going to come true. But the last couple of years have let us see how rapidly robots are growing in brain and in brawn...


Next March or April the US Army will have some of these robots operating in Iraq:

It is a black, 2-foot-six-inch robot rolling on twin treads, with an M249 machine gun cradled in its mechanical grip. Basically it is the same Talon robot they currently use for bomb-disposal duties. 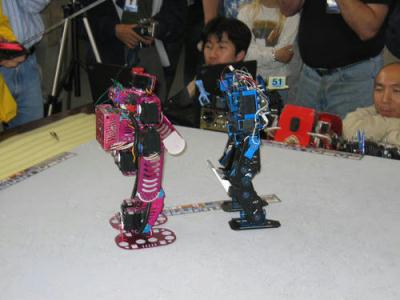 The 2004 Robo-One contest, held in Kawasaki, central Japan on 8 August, drew hundreds of spectators. The event is inspired by the sport K-1, a combination of kick-boxing other martial arts that is popular in Japan.

But the contestants are remote controlled robots constructed and operated by robotics enthusiasts and experts. Robots battle it out one-on-one for the title of overall Robot-One champion. In each bout a winner is declared if a robot is unable to stand within ten seconds of falling over, or if one freezes up or falls from the fighting platform.

The competition also includes a frenetic multi-robot brawl known simply as "The Rumble". Eight robots scrap it out with the last one standing declared the winner.

Follow the link below if you want to see video footage of the robot fighting!

So what is the downside? The robot will most likely have to attract the hapless flies by using a stinking lure concocted from human excrement.

With a top speed of 10 centimetres per hour, EcoBot II's roving prowess is still modest to say the least. "Every 12 minutes it gets enough energy to take a step forwards two centimetres and send a transmission back," says Melhuish.

But it does not need to catch too many flies to do so, says team member Ioannis Ieropoulos. In tests, EcoBot II travelled for five days on just eight fat flies

The only limit to this idea is things they can eat. Nobody really minds if a few robots eat a few flies. I'd like to see a robot that ate seagulls and cleaned our beaches, but not everyone hates seagulls as much as I do....

At present it doesn't have any skills that supercede humans, and it cannot see (the route needs to be pre-programmed)... BUT, one day it will be super-human, and coupled with its relatively expendable nature, highly useful for search and rescue, exploration, and, dare I say, warfare. 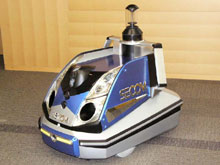 It operates remotely, and according the the manufacturers, at around $3,000 per month it is half the price of a human security guard. And this is serious, and it will affect our lives, for they say 500 robots will be produced in the first year!


(i KNEW this would happen.)

PALM BEACH, Fla. (Dow Jones/AP) - The Food and Drug Administration has cleared the way for Applied Digital Solutions Inc. to begin selling an implantable chip that would contain personal identification and medical data, the company said Thursday. Applied Digital, Palm Beach, said it had received a letter indicating that the FDA does not consider the chip a medical device under its jurisdiction. VeriChip, a small device about the size of a grain of rice, emits a radio signal and has been derided by some for its "Big Brother" implications. Applied Digital has said it could prove invaluable in emergency situations when a patient is either unconscious or can't otherwise reveal information. VeriChip is expected to sell for about $200. A scanner used to read information contained in the chip would cost between $1,000 and $3,000. Shares of Applied Digital rose 4 cents, or 8 percent, to 52 cents in Thursday midday trading on the Nasdaq Stock Market.


If it wasn't for a couple of subtle giveaways, I'd be running around town telling folk about this amazing new product. Worth visiting for the skills of the site designers alone:


The US army has hired two robotics firms to design robot dogs, for the purpose of carrying equipment.

"Today's soldiers carry as much as 100 pounds of equipment. That's exhausting, even for the toughest grunt. In the future, the Army wants to dump up to half that gear onto the back of a drone"

"We're at the bottom of the pyramid right now," said Ben Krupp, president of Yobotics, which won a $750,000, two-year TACOM grant to build a Great Dane-sized drone. "It's tough just to get a four-legged robot to run across the parking lot without falling down."

(meanwhile the Navy is investing in robo-lobsters) 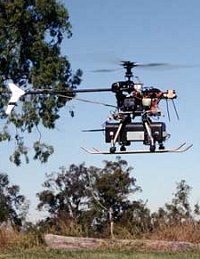 Australian made, this 1.5 metre long and 0.5 metre high helicopter can fly on its own without the help of humans of GPS.

"The robot's eyes work using two cameras and software that detects where objects are and how fast the Mantis is moving relative to objects around it."

Apart from all the good uses such a machine can be put to, it doesn't take much to think of what it could be used for in the wrong hands...


Leaps and bounds in Robotics

Sony have made a robot called QRIO, and it can:

I say fight because "If pushed by someone, QRIO will take a step in the direction it was pushed to keep from falling over." We all know that push and shove can lead to an all out brawl.

Prediction: within 10 years people will be mugged by robots. 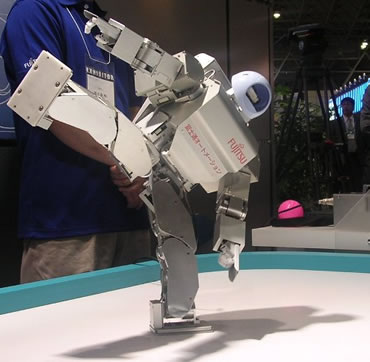 Humanoid robots capable of performing somersaults and complex martial arts moves were demonstrated at CEATEC in Tokyo on Saturday.

Morph3 (above), is 30-centimetres tall, and can perform back flips and karate moves thanks to 138 pressure sensors, 30 different onboard motors and 14 computer processors.

Also on display was Fujitsu's HOAP-2. The little droid can perform moves from the Chinese martial art taijiquan, as well as Japanese Sumo wrestling stances.