Sounds like early propoganda for a movie, like they did with Blair Witch. If it is a movie, sounds great!


The only problem, and big cause for worry among archaeologists, is "the classic Maya really didn't go in for mass sacrifice," Lucero says. "That was the Aztecs."


More from the Indian Journalist


As usual, curiousity value only. How this "newspaper" gets into Google News, considering such commentary presented as facts, is anyone's guess!

The simultaneous polar reversal in earth and sun will throw the solar system out of whack. That will cause massive upheaval in the earth. At that point of time, the extraterrestrials will officially show up and put “cosmic seat belts” around us as they apply the superpower of the Hyperspace to bring the solar system back to what it is today.

According to scientists and technologists something strange is happening behind the scene. The terrestrial and solar polar reversal peaks are coming within three weeks of that day, December 21, 2012. Innumerable UFOs are scouting our skies regularly and increasing as we approach that day. The tectonic plate shifts, underwater volcanoes, earthquakes, landslides and Tsunamis are increasing at rates never seen before. The solar flares are increasing. The earth’s magnetosphere and ionosphere are experiencing strange disturbances. The numbers of typhoons and cyclones have increased many folds. The number of floods and droughts has increased beyond imaginations in the last ten years. Scientists who look beyond conventional science point out that that the Hyperspace that contain our Universe is also showing signs that something strange is happening in our universe. The multidimensional time research is showing that a parallel universe may be predicting strange effects.


Mirage of a Entire City


Even if it is just a reflection of the city it is viewed from, it's a damn unusual thing... 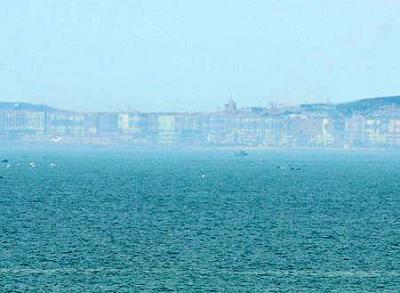 
Daniel Pinchbeck has a chapter of his new book online at Disinformation. The book is called 2012: The Return Of Quetzalcoatl (Jeremy P. Tarcher, New York, 2006).


The Americas Keep Getting More Ancient


In the Peruvian Andes archaeologists have discovered the oldest known celestial observatory in the Americas - a 4200-year-old structure marking the summer and winter solstices that is as old as the stone pillars of Stonehenge. More...

Meanwhile, the ancient Maya turn out to be sophisticated a lot earlier than previously thought. More...


There is actually a 13th constellation that could perhaps be part of the zodiac. On Dec 21, 2012, the sun will pass through constellation of Ophiuchus. Ophiuchus means Serpent Holder, and in my book I am suggesting that the serpent is the symbol of mutational evolution. Read more at lightparty.com


Conference on Precession and Ancient Knowledge


To be held in Sedona, CA, USA on November 11th and 12th. It features speakers like Graham Hancock, Robert Schoch & John Major Jenkins, and is only $135 for the day. I get a feeling the ultimate reason for this get together is to promote the ideas of Walter Cruttenden, who will be telling the audience "that precession is caused by an unseen companion to the sun".

Sounds a bit like Niburu to me, but regardless, if I lived in California I'd be there.


Many or even the majority of folk who think something big will happen 2012, think that it will be something positive (I don't, but hopefully I am wrong...)

The most scientific happy ending theory involves "a kind of singularity, a radical change in the nature of things, or at least the nature of humans will occur that year." Basically, a point where our rate of change and invention as humans reaches a maximum, and some sort of blissful explosion of love and intelligence occurs. Follow the link the read the best single page on this idea I have come across.


Our friend "Staff Reporter" at India Daily has finally told us what he was building up to:

Now that the truth is out, I can stop worrying about 2012 and enjoy life. Thanks "Staff Reporter"!


I have written previously about the Ouroboros, but this is the first time I have heard of people supposedly seeing them, that they could be real... I don't believe it for a moment, but you never know...

All the snake books I ever read, written by experts, say no such creature exists. Yet I keep getting these hoop-snake-sighting reports, from perfectly intelligent people


The Sixth World by Margaret Evans

"The Sixth World" (thesixthworld.com) is a fictional page-turner based on popular beliefs of two California archaeologists who have discovered Maya readying for the new age when they will again rule the world.

It's all expected to happen on Dec. 22, 2012 based on actual Mayan predictions of the new age involving the Earth’s ongoing reverse magnetic energy, sunspots and solar flares. These estimates are backed by many popular websites like 2near.com, 12-12-12.org and timewavezero.com.

"The one thing I continually learn is the more we find out about this culture, the deeper the mysteries seem to grow," Evans said. "While I’m not sure what will happen on December 22, 2012, I think we will all be in for a surprise of some kind.

"The previous five Aztec/Mayan ages were marked with worldwide/cosmic events jibing pretty closely with our own scientific/historic theories, such as asteroids hitting the earth and killing off the dinosaurs. I guess I just can’t get past the Maya being such an intelligent, talented people who could predict planetary and astral movements without the aid of telescopes and machines. What they knew was phenomenal. How they knew it is unknown. That’s my fascination."


Well, a few crazy folk drink their urine and say it is harmless, so why not...

The ration comes in a pouch containing a filter that removes 99.9 per cent of bacteria and most toxic chemicals from the water used to rehydrate it, according to the Combat Feeding Directorate, part of the US Army Soldier Systems Center in Natick, Massachusetts. This is the same organisation that created the "indestructible sandwich" that will stay fresh for three years